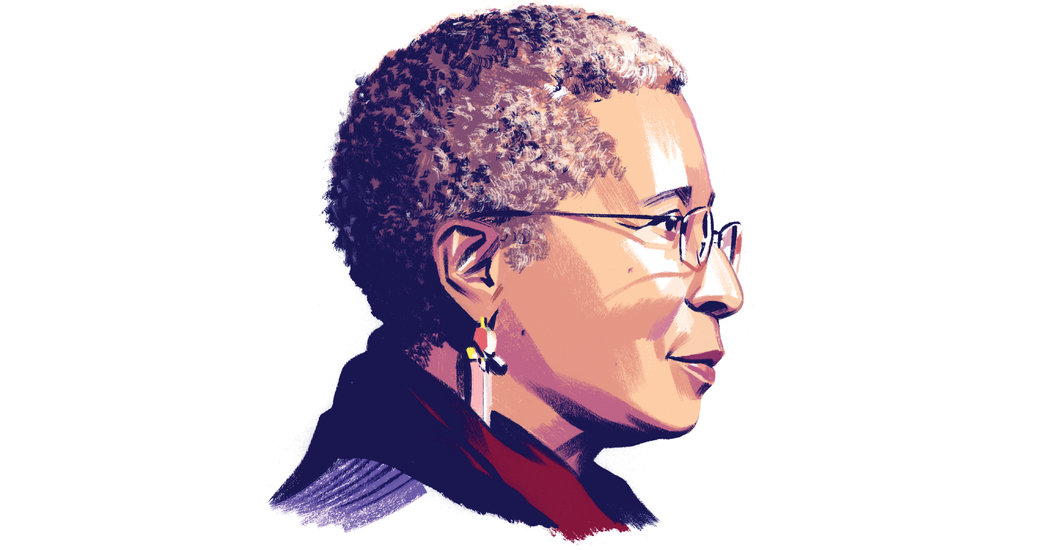 The author, most recently, of the poetry collection “Taking the Arrow Out of the Heart” feels a duty to read about countries devastated by war: “The suffering, usually for the most vulnerable, never ends.”

What books are on your nightstand?

“The Road of Lost Innocence,” by Somaly Mam, about child-selling, enslavement and sadistic “sex” trafficking in Cambodia. Bombed-out, psychologically traumatized Cambodia has become a place where even children are seen as commodities and treated worse than never terrorized or subjugated humans can imagine. Mam, a modern heroine who was once a captive herself, rises to protect and save those few young girls that she can. I couldn’t sleep after reading this book. I felt a duty to read it, however, and others like it, to know without forgetting, that for countries devastated by war, often wars “we” cause, or extend by carpet bombing or laying of land mines, the suffering, usually for the most vulnerable, never ends.

“And the Truth Shall Set You Free,” by David Icke. In Icke’s books there is the whole of existence, on this planet and several others, to think about. A curious person’s dream come true.

“Perfect Peace,” by Daniel Black. I am rereading this incredible novel about a young boy in the Deep South who was raised until he was 8 as if he were a girl. A fantastic investigation of gender issues, large and small. Audio is ideal for this book, especially for readers who did not grow up in the South.

“Mom & Me & Mom,” by Maya Angelou. This is my favorite Angelou book. It is revelatory about a life of high adventure with her completely tough, gun-toting, charming, fearless and seductive mother.

Who is your favorite novelist of all time?

Charlotte Brontë. My feeling of kinship with “Jane Eyre” has never waned.

“Who Asked You?” by Terry McMillan. This novel is a rich celebration of mothers who have, in the age of crack cocaine, been forced to raise their own grandchildren, having lost their daughters to the epidemic. It is word perfect, sometimes hilarious, always honest to the life of its characters and to “ghetto” society. I don’t understand the title of the book or the book jacket art, but the book itself is essential reading for these and future times. I recommend audio for a captivating listening experience.

What’s the most interesting thing you learned from a book recently?

That though captured while in Africa, Africans became slaves only during the long crossing of the Atlantic Ocean, when they were treated so horrifically that those who could manage it jumped into the sea. They had no place in their psyches to fathom their abuse: Subjected to every kind of depravity and horror, during the passage and after, they arrived to be forced onto platforms and bid on, a process that could drag on and on, as plantation owners rejected those for whom they had no use. Africans were “broken in” physically, and broken down spiritually, to such an extent they became what they had not been in their homelands or halfway through the voyage: slaves. This treatment, deliberately calibrated to destroy their inner sovereignty, was called “seasoning.” In Daniel Black’s extraordinary book “The Coming,” we have an unprecedented opportunity to be with ancestors who probably never dreamed a scribe would one day appear to make their descendants not only imagine their plight but also, by being brought to tears by the narrative, gain access to an emotion that makes us one with them. Shamanic work.

What moves you most in a book?

The witnessing of a great soul. A magnificent spirit in action. A warrior whose mental weapons seem to come equally from heart and air, and whose soul is nourished by solitude and dreams. In other words, the writer’s courage.

Did you read poetry as a child?

We owned two or three thick volumes of English literature called “Prose and Poetry.” I wish I knew where they are now! They were the foundation of the family’s literacy and love of literature. “If you can keep your head when all about you are losing theirs and blaming it on you.…” The refrain was: “You’ll be a man, my son.” But I ignored the “man” part. I knew I was being spoken directly to, and this has turned out to be true. I have gone my own way, because of that early impression that it is right to do so. Poetry is that kind of gift.

I was also strengthened by the love the people in my community had for poetry. They appreciated my first poem: “Easter lilies pure and white, blossom in the morning light.” Their praise, when I was 3 or 4, gave me permission to be a poet, with all the intrigue and adventure that would later involve. Well, if only they knew!

Was there a book of poems or a poet in particular that inspired you to write?

I loved Emily Dickinson. Robert Frost. T. S. Eliot. Paul Laurence Dunbar. Langston Hughes. Margaret Walker’s “For My People” moved me deeply. Also her poems “October Journeys” and “We Have Been Believers.” But no, I think sorrow more than poets inspired me to write. That and the most rapt love of nature all around me, that seemed to require something creative from me to attempt to match — a gold and crimson leaf, perhaps, or the way a turtle’s shell fits perfectly, or the notion that horses, though heavy, could swim! The wonder of it. I felt from a very young age that somehow we had, as humans, emerged into a magical world, a true wonderland, for which my deepest sadness was no match.

Which poets continue to inspire you?

Taoist poets. “The Activist’s Tao Te Ching: Ancient Advice for a Modern Revolution,” by William Martin, is a recent inspiration. Rumi, always. Among modern poets, I like Mary Oliver.

Do you see your writing as having evolved over the course of your career? In what ways?

It feels more direct. In fact, I have a blog and I publish directly on it, sometimes several pieces a month. I have always wanted my heart to be directly in touch with the reader’s. I have wanted to say, on a day when things look dark, here is a reason this moment is not without beauty, nor is it final. As someone who has suffered from depression, I know how important this kind of signal from another human can be.

If you had to name one book that made you who you are today, what would it be?

Probably “Gulliver’s Travels.” I was 11 when I read it and it encouraged me to believe the world was large, fascinating, and with incredibly interesting creatures in it! And I have discovered this to be true! So when I fall in love, for instance, it is never an impediment that the object of my affections might be, or seem to others to be, odd.

What books might we be surprised to find on your shelves?

Every novel by Richard Yates. Except the one about prep school days. I was glad there was a movie of “Revolutionary Road.” Kate Winslet and Leonardo DiCaprio (one of my favorite actors; brilliant also in “The Wolf of Wall Street”) were flawless. I don’t understand why Yates isn’t read in every English class. I think he’s much more interesting than either Hemingway or Fitzgerald. Whom I also like and read. He’s more crazy, of course. More truthful, too. “Down and Out in Paris and London,” by George Orwell. “Animal Farm” and “1984” overshadow Orwell’s essays and travel writing. “Down and Out” is hilarious, with a humor quite unexpected in the otherwise seemingly somber Brother Blair. I listen to it often (a couple of places are dated and I have to skip) when I want to laugh.

If Rhett Butler, in “Gone With the Wind,” had not been a racist who killed a black man during Reconstruction for being “uppity,” he would be not a “favorite,” but at least someone, as a character of fiction, truly interesting. He is exceptionally understanding of women.

Of the books you’ve written, which is your favorite or the most personally meaningful?

“The Temple of My Familiar,” because I was aware I had help from beyond my usual Nature and ancestral accomplices. (I wrote about the journey of writing it somewhere, “Writing ‘The Temple of My Familiar,’” but can’t find it.) For one thing I became obsessed with the colors turquoise and coral. And as I was looking everywhere for those colors — from Bali to Mexico to everywhere else! — the stories in the novel, covering thousands of years, began to emerge from some formerly unknown layer of understanding. It was quite a new experience for me, and one I enjoyed tremendously.

If you could require the president to read one book, what would it be?

“Why War Is Never a Good Idea.” It is a book for children that I wrote many years ago. I believe it is immoral for adults to distort the reality of war to children. As a writer I felt I could introduce war as the disaster it is for creatures — including children — and the planet. Without scaring them, but by making them thoughtful about wearing those camouflage diapers. I will always be on the side of babies. Which is why I support a woman’s right to abortion. How dare we bring anyone so small and helpless into our dangerous situation?

You’re organizing a literary dinner party. Which three writers, dead or alive, do you invite?

Disappointing, overrated, just not good: What book did you feel as if you were supposed to like, and didn’t? Do you remember the last book you put down without finishing?

Actually, it was “Fear,” by Bob Woodward. I had waited eagerly to read it because I realize the danger we are in. Omarosa Manigault’s book “Unhinged” had been scary, but full of color and life. Woodward’s book, and I’m sure it is very important, essentially lacks Shakti. There are women in the story, but they lack the quality of energetic feminine connectivity with life that means inevitable change. The men have expunged any Shakti they might have had in order to be powerful at the level they feel they must operate. We will not survive going in this direction. Of course this is exactly what Woodward is saying.

Whom would you want to write your life story?

Seriously? I am content, even happy, with “Alice Walker: A Life,” by Evelyn White.

What do you plan to read next?