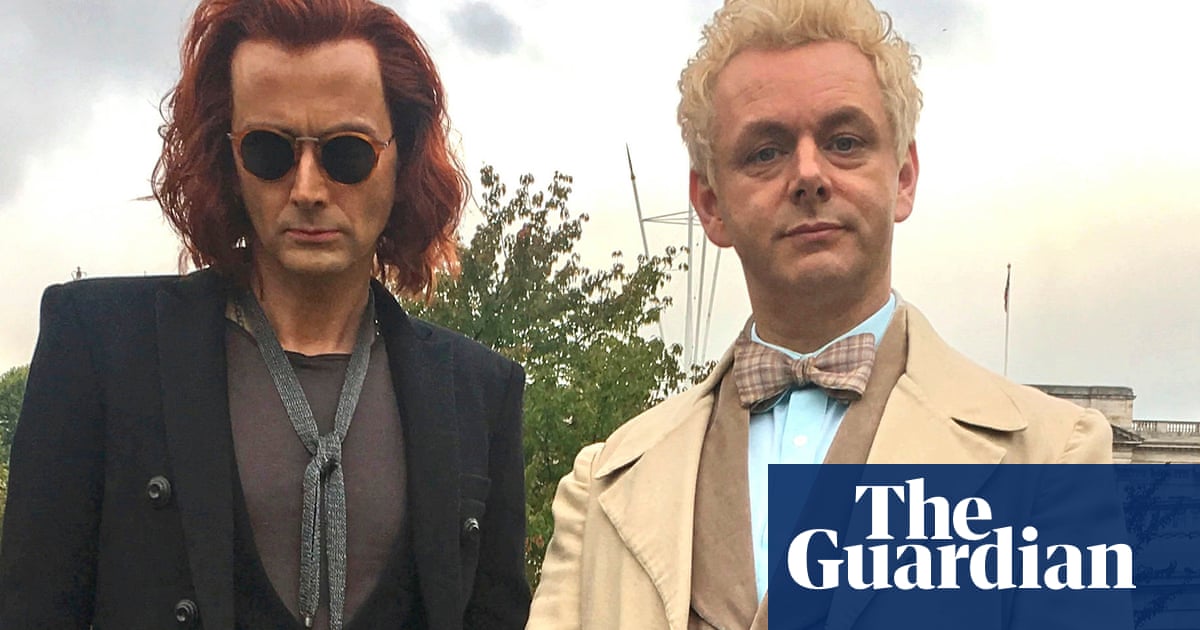 There’s probably never a bad time to read Good Omens, but it’s hard to imagine a better one than right now. It isn’t easy being a citizen of the world at the beginning of the 21st century, and the past two weeks in the UK have been especially unsettling. Retreating into the warm embrace of Armageddon as imagined by Terry Pratchett and Neil Gaiman has been the best possible definition of light relief. They make End Times feel like fun – which is just the distraction I’ve needed as civilisation crumbles around us.

My feeling that this is a good book (in a moral and emotional sense, as much as anything else) has only been increased by last week’s comments. It’s been genuinely moving to read the testimonies to the healing power of Pratchett and Gaiman. I feel more affectionate still towards this book because rereading has also brought back happy memories of first encountering it as a teenager.

Which is all very positive. But it does rather dent my credibility as a critic of this particular novel. I’m better qualified to pat my copy of Good Omens and sing it gentle songs than I am to review it.

Even in this confession, I’ve misrepresented the book’s true nature. Here I am, fondly describing Good Omens as some kind of panacea, when a good part of its power comes from something far darker. There may be plenty of affection for humanity here, but there’s also burning anger. There’s real rage about big, serious issues such as environmental desecration and the absurdities of religion. And there’s just as much fury about the little things. One of my favourite jokes in the book is about four bikers who try to become a back-up for the “Four Horsepeople of the Apocalypse”: War, Death, Famine and Pollution. The bikers become the four relatively minor inconveniences of the apocalypse with names such as Ansaphones, Cruelty to Animals, Things Not Working Properly Even After You’ve Given Them a Good Thumping and No-Bloody-Alcohol Lager. Harmless enough – but the joke only works because it’s bristling with genuine irritation.

More painful to admit is the fact that the book may well have flaws. Every time I tried to think about them while I was reading, my thoughts slid away, just like they do from anyone in the book who tries to think too hard about the true nature of 11-year-old antichrist Adam. We are told, for instance that when the witch Anathema tries to work out anything about this strange boy, her thoughts “slipped away like a duck off water”. Which pretty much sums things up. Because when I reached that passage I was laughing in delight. But when I came back to analyse it, I started worrying that sentence doesn’t make much sense. Isn’t the correct phrase “like water off a duck’s back”?

Similarly, as I tore through the novel, I wanted to applaud the way the authors not only got all their various characters to land in the right place at the right time to enact the climactic scenes, but also put hilarious difficulties in their way. My initial thought was that this would be a fantastic book to use to teach creative writing students about plotting and timing. It was only later that I realised that this idea would depend on those students being willing – for instance – to turn the M25 into the “sigil Odegra” in the language of the Black Priesthood of Ancient Mu (which means “Hail the Great Beast Devourer of Worlds”) then set it on fire, and then allow several lead characters to drive through it anyway. Meanwhile, those students would also have to leave quite a few of those same characters do little more in the final scenes than hang around providing ammunition for jokes.

But really, who cares, when the jokes are so good? We’ve already quoted dozens, perhaps hundreds last week, but I can’t resist one more from those final moments in the novel: “Men in fatigues stopped screaming and waving guns at one another, and would have had a beer if alcohol had been allowed in missile bases. It wasn’t, but they had one anyway.”

OK – sorry – let’s make it two, because the last line of the book is also a doozy. The authors describe the young antichrist:

And there it is again: a fine joke, but also within the context of the book, an image that is beautiful, heartening and positively life-affirming. It makes me feel soppy. And just as I can’t really tell you what might be wrong with the book, I also can’t convey how much I love it.