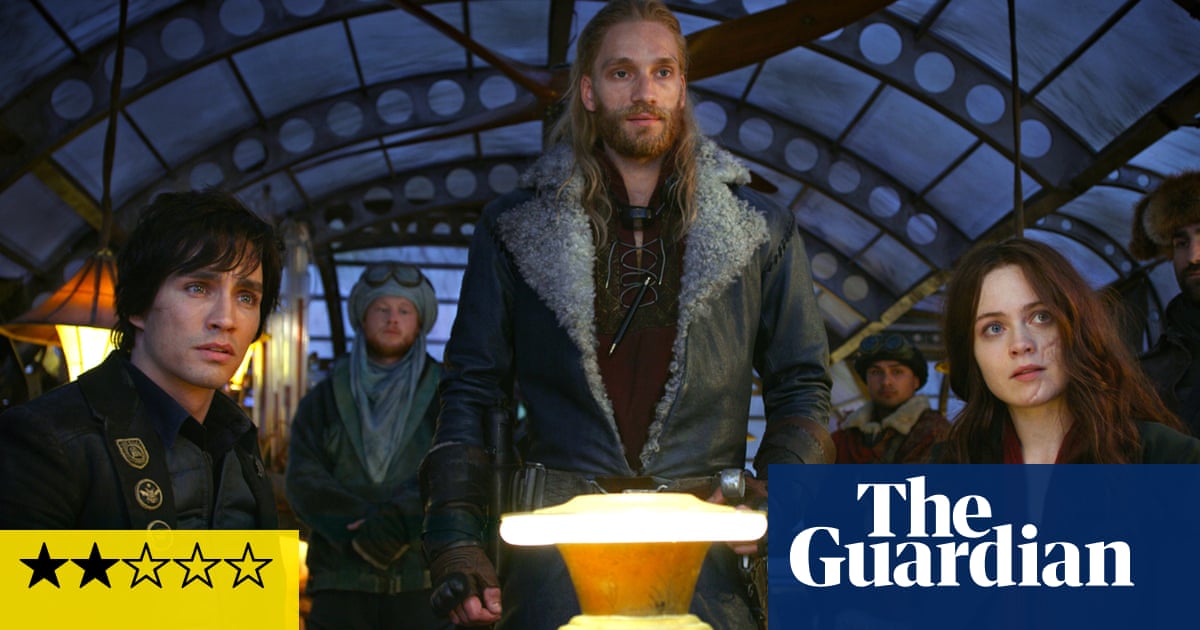 Mortal Engines was originally a YA dystopian adventure novel from British author Philip Reeve, published in 2001, the first of the “Mortal Engines quartet”. Among its many fans is Peter Jackson, who has now turned it into a tiringly frenetic and derivative fantasy-adventure movie, co-producing and co-writing the adaptation with Fran Walsh and Philippa Boyens. Making his directing debut here is Jackson’s former storyboard artist and visual effects supervisor Christian Rivers.

The film is basically a steampunk Star Wars, with a bit of low-octane Gilliam and Gaiman on the side. By the end, in fact, the resemblances to George Lucas’s great creation become so distractingly obvious that it is difficult to credit that it isn’t some kind of intentional homage.

We are in a post-apocalyptic world, the Earth having been ravaged by a “60-minute war”, which has created a devastated landscape. In some places are what are called “static settlements”, but the land is roamed by moving cities, “traction cities”, which have somehow attached tank-track wheels to the soil underneath them, and now clank about in a sinister and predatory way, like Stephenson’s Rockets of evil, swallowing up lesser mobile communities, enslaving their populace, using the buildings for fuel and most importantly of all, scavenging for “low tech”: pre-digital machinery and technology of the sort which, however battered and rusted, can still conceivably be fixed and put to work, specifically for warlike aims. The idea is a little like the aggressive flying island Laputa in Swift’s Gulliver’s Travels, or Howl’s Moving Castle, the children’s book by Diana Wynne Jones, which was turned into a Studio Ghibli animation by Hayao Miyazaki.

The scariest traction city is London, or perhaps “London”, because this city is obviously a smaller version of the real thing, and features a Las Vegas-style amalgam of its most famous tourist landmarks dotted about: a replica St Paul’s with red telephone boxes, a couple of the Nelson’s column lions, etc. This is the seat of empire, the kind that has no need to strike back, because no one is strong enough to strike against it in the first place. It is policed by various uniformed groups who look like constables, Beefeaters or droogs. The captain of this quasi-urban warship is effectively Thaddeus Valentine (Hugo Weaving), though he appears notionally subordinate to the city’s mayor Magnus Crome (Patrick Malahide).

The charming, charismatic but sinister Thaddeus is attacked by a disfigured assassin with a personal grudge against him: this is Hester, played by Hera Hilmar, who is to make common cause with the story’s initially hapless but stout-hearted young hero, Tom (Robert Sheehan), a young apprentice who discovers a dangerous secret about Thaddeus. When both Hester and Tom are expelled from London, a new figure enters the story: Anna Fang, played by South Korean music star Jihae, who is the badass leader of that group which must always crop up in YA dystopias: the “resistance”. The “resistance” is there to create the open-ended narrative possibility of battles won and lost, important for extending the single YA story into a franchise.

There are some lively things about Mortal Engines, and the performances are game enough. Yet in all its effortful steampunkiness, Mortal Engines isn’t a film which is particularly exciting or funny, and the idea of the “traction city” is a stylistic and visual design tic that you just have to take or leave. There is no point in wondering exactly how the colossal engineering feat of putting a city on wheels and moving it about was achieved, especially in an avowedly tech-impoverished age. This film’s engines are spluttering.