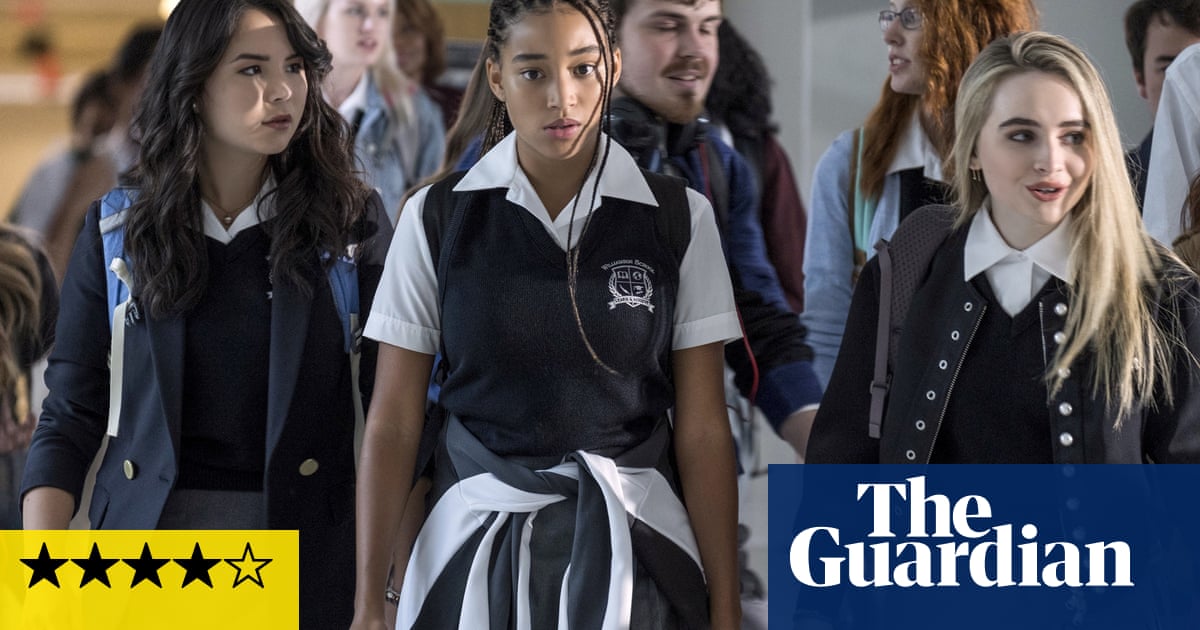 Angie Thomas’s young adult bestseller The Hate U Give won plaudits last year for its thoughtful account of the effects of police brutality on a black teenager. Now, a year later comes a daring and deeply felt adaptation from director George Tillman Jr (Notorious, The Longest Yard), anchored by a heavyweight performance by Hunger Games star Amandla Stenberg.

Stenberg plays Starr Carter, a teenage girl living with her parents and two brothers in the tough (fictional) neighbourhood of Garden Heights. Starr’s father Maverick (Russell Hornsby) is a former gang member turned community leader keen to impress on his children both the importance of black pride and the dangers that being a person of colour in an institutionally biased nation brings. Early on in the film he delivers “the talk”, the grim but necessary explanation of how to negotiate an encounter with the police given by every African American father to his children.

Garden Heights’s local high school is, in Starr’s words, where “you go to get drunk, high, pregnant or killed”; so the children attend an elite, and predominately white, private school instead. Over time Starr has learned to carefully code-switch between these two worlds, existing as normal Starr in Garden Heights and “Starr version two” at school. Despite her white classmates co-opting the language, clothing and culture of black America, Starr v.2 knows that she has to be as softly spoken and non-confrontational as possible to avoid being stereotyped. (“Slang makes them look cool, but it makes me look hood,” she notes sagely.)

Outwardly, this tactic seems to serve her well: she is considered a model student, is popular with her classmates and has a good-looking boyfriend (KJ Apa) – though the ugly looks given by some of the girls at school to this mixed-race relationship underlines that bigotry still lies beneath the surface.

Back in Garden Heights Starr attends a house party where she bumps into Khalil, her childhood friend and first crush, who is now working as low-level dealer. Khalil offers to drive her home but on the way, the pair are stopped without reason by a white police officer. Remembering the advice of her dad, Starr prostrates herself on the dashboard, but Khalil, quite understandably, is unwilling to play along with this racial-profiling parlour game, and is ordered out of the car. When he innocently reaches back through the window for a hairbrush, the officer fatally shoots him, and Starr, restrained by the panicking officer, is forced to watch her friend bleed out.

It’s a deeply distressing moment, particularly in the context of a what is ostensibly a teen movie, and Tillman Jr refuses to soften or underplay it. Horrifying too is the dehumanising interview Starr endures at the police station directly afterwards, where the officers choose to victim-blame and build a case against Khalil – and by extension Starr – rather than ascertain the truth.

Any opportunity Starr has to process or grieve over the incident is curtailed, as competing factions attempt to use her to their own ends. She is urged by a lawyer and activist (played by Issa Rae) to speak publicly about her experiences, despite the very evident risks such a move will bring. Local gang leader King (Anthony Mackie), meanwhile, is leaning on her to keep quiet, for fear that she will implicate him by speaking about Khalil’s dealing. And as her manufactured version two persona at school gives way to something more authentic, Starr’s classmates turn on her, exposing their true prejudices. It’s only Starr’s family who remain unreservedly supportive, with Regina Hall excelling as her cautious, composed mother.

Throughout The Hate U Give, Tillman and screenwriter Audrey Wells are careful to frame the complex issues the film raises through the reactions of its teenage character, so that when Starr does eventually embrace social activism, it’s a moment that feels genuinely earned. This is the emotional Sturm und Drang of YA, but used in service of bigger themes. It helps that in Stenberg they have an actor who can pull off the grand weepy scenes without lapsing into melodrama. It should be said that clocking in at an unwieldy two hours and 12 minutes, The Hate U Give does lumber slightly in its final act, with a climactic scene that feels a little emotionally overwrought, though one that’s hardly inconsistent with much of the YA genre.

Like Thomas’s original novel, which was banned by schools in Texas, The Hate U Give is likely to anger some. You suspect though, that it will stir many more. This is mass-market entertainment with a radical bent, a loudspeaker blast of a teen movie.