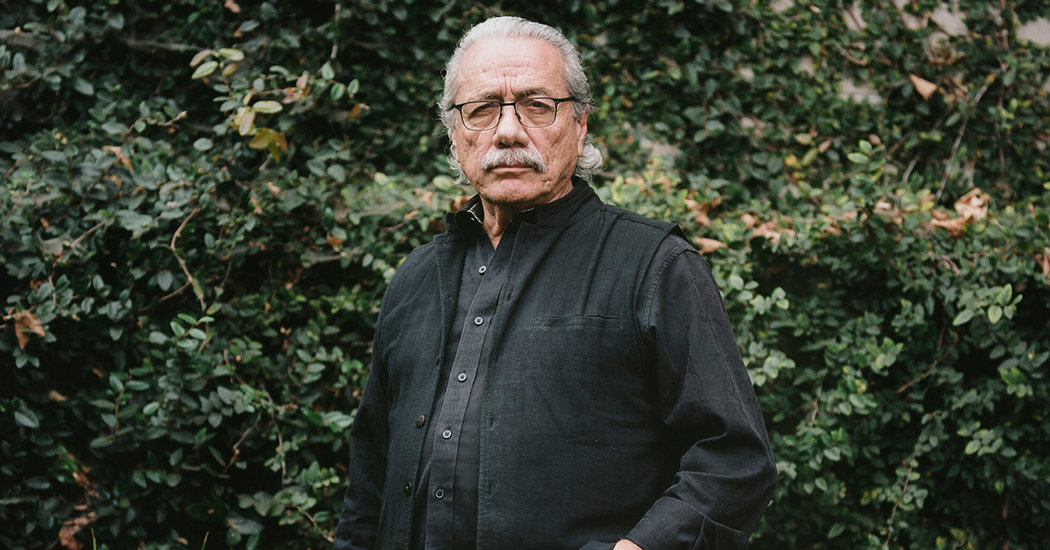 Art and activism are closely related for the Mexican-American actor Edward James Olmos, who has spent more than four decades working with outreach programs on behalf of Latino voters, prisoners and students. Mr. Olmos’s performances in projects like the 1988 high school drama “Stand and Deliver” and the 1992 crime saga “American Me,” also draw attention to the obstacles that modern Latino citizens face when they try to assimilate into American society.

In the new FX drama “Mayans M.C.,” a sequel to “Sons of Anarchy,” Mr. Olmos plays Felipe Reyes, the father of a former golden boy turned ex-con (J.D. Pardo) who joins a biker gang. In a phone interview, Mr. Olmos talked about the series, offsetting stereotypes and how he took control over his Emmy-winning “Miami Vice” role. These are edited excerpts from the conversation.

You often do a lot of research and preparation before taking on a role. Where is Felipe Reyes coming from?

When you prepare for a role, what kind of background information helps you the most?

When I’m developing a story, if it happens to be based on fact, then the more research information I can get, the deeper the story can go. For instance, in “The Ballad of Gregorio Cortez,” we were fortunate to run across the most definitive documents concerning the case. We were able to read all the transcripts, newspapers from around the country and testimony that came out during 1901. When it’s fiction, then I look for resource materials centered around the subject matter.

You turned down roles in prominent films like “Scarface” and “Red Dawn” because they either contained too much violence or portrayed minorities in a negative light. Do you feel you have to be responsible for how you portray violence?

Yes. I do feel a sense of responsibility when I use this medium because it attacks the subconscious mind, especially when it’s put on the big screen. But television also has a tremendous impact on viewers, so the creators of shows like “Mayans M.C.” have to understand that responsibility. Sometimes they do. Sometimes they don’t.

You turned down Michael Mann four times before taking on the role of Lieutenant Castillo in “Miami Vice.” How hard was it to ask for creative control over that character?

I was very fortunate that, at that time in my career, I could ask for artistic control and non-exclusivity, which was paramount to the way that I was working at the time. I had done “The Ballad of Gregorio Cortez” and was trying to distribute the film by personally traveling with it all around the country. I was also working on a story about a schoolteacher from an inner-city school who helped the students understand mathematics. It was later called “Stand and Deliver,” but I didn’t have the money for it yet. The story was very important to me, so I could not get involved with a television show that would take up 10 months of my life per year in an exclusive way. When Michael Mann called, I turned him down because I needed to work on my films. He later came back and gave me a nonexclusive contract with artistic control of my character.

Recent shows and movies before “Mayans M.C.” have used the cartel as antagonists, like “Breaking Bad,” “Narcos” and the two “Sicario” movies. You’ve acted in a couple of episodes of “Narcos.”

“Narcos” is a very well-defined piece of work. It’s like what Kurt Sutter’s doing with “Mayans M.C.” He really dives deeply into the subtext of the characters’ lives. Using the medium to entertain, it can be very hard not to glamorize violence. Like with “Miami Vice”: It’s based on a true concept of the War on Drugs. But sometimes, it was so stylized that viewers would forget what the show was about. Just like with “Narcos,” which is almost romantic at times. Sometimes, “Mayans M.C.” threatens to go that way. But it’s so dark, and pretty honest, too.

Are there lesser known projects of yours that you wish had caught on in a bigger way?

Yes. They all have something to say. The stories that I’ve picked have given us an opportunity to look into the culture that was represented, and for that I am very proud. “Selena,” “My Family,” “Stand and Deliver,” “American Me” and “Triumph of the Spirit,” to name a few. One project that was literally hard to see — the picture quality on VHS was muddy and way too dark — is “The Ballad of Gregorio Cortez.” The Academy of Motion Picture Sciences just restored it, and the Criterion Collection put it out on Blu-ray this month. So now you can actually see what’s going on.

You do volunteer work with Mexican-American prisoners and juvenile hall detainees. What kind of feedback do they give you about the racial stereotypes that they see in movies and TV shows?

Sometimes people get very upset about seeing stereotypical images of their culture and I understand it. Stereotypes are rooted in truths. The problem comes when that’s all you ever see. That’s why when I did “American Me,” I did it after having done “Stand and Deliver.” It gave a balance of the community I was talking about.

You also worked to get Latino-Americans to vote in the 2016 presidential election. What was that experience like?

I’ve been fortunate to work with the Southwest Voter Registration Education Project since 1978, so it’s been 40 years. We talk to people who can’t register to vote, and get them in touch with people who can so that there’s a constant dialogue. We had a lot of great participation in the 2016 election. I’m not sure of the exact numbers, but I remember that there were a lot of enthusiastic participants.

Are Americans making greater progress toward assimilating its citizens’ various backgrounds and identities?

No, I don’t think we’re moving toward a more unified sort of humanity. We’re very divided by cultural, religious and political views, and it’s getting more and more defined by those differences. We’re not even close to being able to say that we’re moving in a positive direction. And we haven’t been since maybe the Second World War.