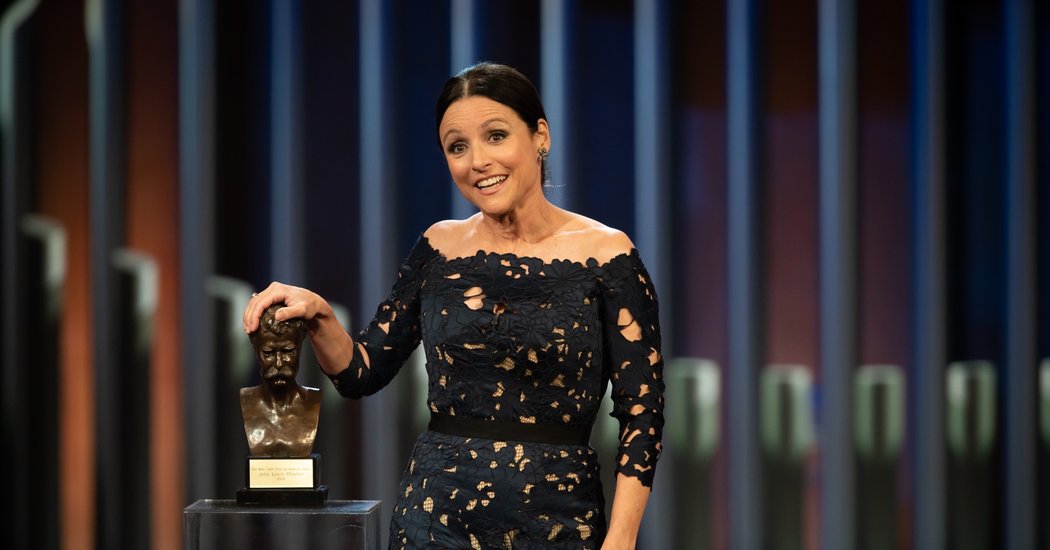 WASHINGTON — Julia Louis-Dreyfus found her fame as a “network note.”

That was how NBC executives — worried about the initial lack of gender balance on “Seinfeld” — asked the show’s namesake, the comedian Jerry Seinfeld, for a female lead on a show slated to star three men. Seinfeld, who was wary of advice from the prosaic company brass, nonetheless agreed that a “real female character” was essential.

Decades later, Seinfeld recalled his good luck here Sunday night at the Kennedy Center as Louis-Dreyfus accepted the Mark Twain Prize, considered the top honor in comedy, for a career that has continually tested the boundaries traditionally set for women in the field.

“I could not get enough of her,” Seinfeld said of their partnership on screen. “That whole time, nine years, I was not acting. I couldn’t.”

Louis-Dreyfus, 57, has played several characters who have become part of the pop culture lexicon, including Elaine Benes, the socially progressive, fast-talking, idiosyncratic best friend and former love interest of Seinfeld’s character known for her sharp-elbowed dancing.

More recently, she has starred as Selina Meyer in “Veep,” a celebrated HBO show satirizing a bumbling vice president and the Washington strivers around her, for which she earned six consecutive Emmy Awards. (The show went on hiatus after Louis-Dreyfus announced last year that she had breast cancer.)

On Sunday, Louis-Dreyfus became the sixth woman to receive the Mark Twain Prize in its 20-year history, a theme that threaded through the ceremony.

There was Tina Fey, herself a recipient of the Mark Twain Prize in 2010, who praised Louis-Dreyfus’s performance as Elaine Benes.

“In the early ’90s, at a time on network TV when actresses were expected to have great timing and great tans and great eating disorders, Julia made the bold choice for her character Elaine Benes to wear long, loose dresses, flat shoes and oversized coats,” Fey said. “She didn’t need to give us midriff.”

And there were Ilana Glazer and Abbi Jacobson, stars of the Comedy Central show “Broad City,” who credited Louis-Dreyfus with their own comedic confidence.

“Julia, you lead the charge for authentic and flawed female characters in comedy,” Jacobson said. “Every time you create a character, you open a door, a door for another generation of young women to goofily walk through.”

“She hung out with the guys, but without changing who she was to please them,” Glazer said.

The two filmed an elaborate sketch with a professional dance troupe practicing the signature Elaine Benes dance, then brought the troupe on stage for a final performance. (The dancers’ attempt to engage the crowd — which skewed older — failed.)

The actress Ellie Kemper of the Netflix show “Unbreakable Kimmy Schmidt” spoke in a video tribute about that same influence, noting how important it was that Louis-Dreyfus also produced “Veep.”

“It’s crucial that women have those positions, to promote women,” she said.

The comedian Keegan-Michael Key said that “men have it easy. It’s the women like Julia who have fought to create the path for other women to follow. Open doors, change the dynamic.”

Some tributes tripped over the very tropes they were trying to mock, perhaps intentionally.

“She was one of the guys,” George Shapiro, one of the producers of “Seinfeld,” said in a video tribute.

The other women who have received the Mark Twain Prize are Whoopi Goldberg, Lily Tomlin, Ellen DeGeneres and Carol Burnett.

The ceremony for Louis-Dreyfus made frequent allusions to politics. Fey mentioned that she and Louis-Dreyfus “both won Emmys for people who should never be vice president,” referring to her time playing Sarah Palin, the 2008 Republican vice-presidential nominee, on “Saturday Night Live.”

In her remarks, Louis-Dreyfus, who has supported Democratic candidates and climate-related causes, said that she grew up in the Washington area “in the quaint old rule-of-law period.”

In the crowd Sunday were several Trump administration officials, including Alex M. Azar II, the secretary of health and human services, and Betsy DeVos, the education secretary, who entered the Kennedy Center with a coterie of security guards.

Many of those who spoke talked about Louis-Dreyfus’s kindness, how constant and straightforward it was, even in the middle of a show’s production, or after a triumph.

Mary Gross, a fellow cast member on “Saturday Night Live” in the 1980s, said that Louis-Dreyfus would send guests on her shows handwritten thank-you notes, even though “being on the show is the prize.”

Lisa Kudrow, a star of “Friends,” said that after Louis-Dreyfus won the Emmy one year, she sent Ms. Kudrow, a fellow nominee, flowers with a note attached: “You were robbed. -Julia.”

Tony Hale, the actor who plays her worried-looking sidekick on “Veep,” said that he was often asked how he felt about the show ending next year.

The chaotic nature of their work, Mr. Hale said, was what allowed Louis-Dreyfus to display her tenderness.

“The main difference with Julia is she consistently handles it with grace and integrity,” he said of the demands of producing television. “Julia knows what matters and makes it a priority above everything else.”

Louis-Dreyfus spent part of her early life in the Washington area, where she attended Holton-Arms, an all-girls school in suburban Maryland. (Before the ceremony started Sunday, those who went to school with her were asked to raise their hands.) When she left for Northwestern University, she found a Chicago home at Second City, the famed improv troupe, and at the Practical Theatre Company, which her husband, Brad Hall, helped create.

Even Louis-Dreyfus’s earliest roles said something about the plight of female comedians in an industry long unfriendly to them.

When she was still in college, Louis-Dreyfus was cast on “Saturday Night Live,” where she played a televangelist with a raunchy retelling of the Nativity. She has said those years were grim — a young woman trying to prove herself in a male-heavy cast — and missing the camaraderie of her work in Chicago. And on Sunday, she said it was not appropriate for her work there to be honored in a celebration of comedy.

At the end of the ceremony, which will air Nov. 19 on PBS, Louis-Dreyfus revealed that around the time she got the role on “Seinfeld,” she tried out as Portia in a Broadway production of “The Merchant of Venice” directed by Sir Peter Hall.

Not getting the role still haunted her, she said. So on Sunday, she performed several lines from the play, reading them with ironic drama, at one point lurching into the Elaine Benes dance.