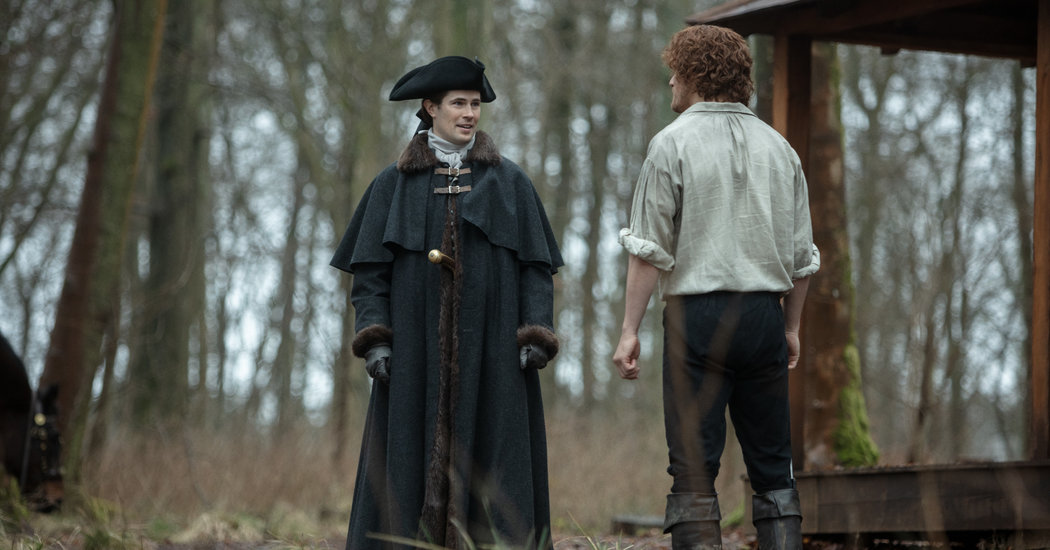 Nothing like a family secret to bring people together.

Jamie has always known young William is his, and he has struggled never to betray the secret. That secret became a turning point in Jamie’s relationship with Lord John Grey. Jamie told Claire after she returned to the 18th century — the first test of their relationship after her long absence. It’s not even all that earth-shattering to Murtagh — he meets William only once, but that family resemblance is hard to deny. (His only burning question, and it’s a good one: “Does Claire know?”)

But Jamie’s secret doesn’t have a transitive property. People Jamie trusts often don’t trust each other. John Grey was prison governor when Murtagh was imprisoned, and Claire and John are pillars of salt. Next to all that tension, Jamie’s struggle not to spill his secret to his secret son is practically incidental.

John Grey occupies a unique position. He is elite (and slightly elitist) and a true believer in British methods despite evidence to the contrary. He is also not above making the most of his power — shortly after he became governor of Ardsmuir prison, he propositioned Jamie. All those things are red flags elsewhere in “Outlander.” (We’re rarely asked to sympathize with characters who hold such institutional power over our heroes.)

This episode even reminds us just how different John’s values are from those of Jamie’s old inner circle. At dinner, John is more upset at the idea of angry subjects than he is at reports that men in power might be governing unfairly. (Not All Brits!) Murtagh can barely sit still long enough to finish the meal. But landlord Jamie, who has more in common with John than with Murtagh at the moment, isn’t willing to lose John’s friendship over it. Chess now, politics later.

John’s love for Jamie cuts a Romantic figure — the depth of his attachment is what makes him human. But that also has informed the bulk of what we know about his character so far. We know he honors promises, but Jamie got most of those promises. And when John shows up to pay his respects at Fraser’s Ridge, there is more emphasis on unrequited love than on friendship. (John isn’t subtle.) No surprise that Claire eventually confronts him: “I can’t for the life of me understand your motivation for coming here.”

Of course, the real point of his visit, at least from a storytelling perspective, is to trap Claire and John Grey in the cabin as she nurses him through measles and they hash out their unfinished business. They each know the other’s soft spot — Claire has Jamie’s romantic love, and John had 20 years with Jamie that Claire can never have. It’s great to see Caitriona Balfe give Claire so much old pain to work from, and David Berry gets to add some depth to John Grey beyond his pining.

There’s not as much depth to this fight as there could be, though, and some volleys — like John’s “I could have had him” — need a lot more examination than they get. But the stakes for each character are real. John’s love for Jamie is a safe way to avoid facing other problems, such as guilt over not loving Isobel. Claire is not entirely secure in her relationship with Jamie — and after everything, maybe she never can be. Their weary détente is about all they can hope for. The question is whether they’ll ever have a relationship defined by more than resenting each other over a willfully oblivious Jamie.

We certainly don’t find out this episode. Jamie spends most of it making sure young William (a very game Oliver Finnegan) avoids measles, giving him a Dad of the Year field trip. Sam Heughan does good work running Jamie’s suffering just underneath his reassurances and lessons. It’s interesting enough that the clumsy setup for the big reveal feels doubly awkward. We didn’t need another instance of Fraser bravery impressing the Cherokee so much that it gets them out of any consequences.

And in giving up the family secret, the show has given up a lot of potential angst for Jamie at a time when — oddly — it feels as if he could use some. We can assume, however, that “Outlander” won’t hesitate to find some new angst for its heroes to gnaw on.

• “’Tis the mountain air, I expect.” Murtagh might have been persuaded to stay longer if he weren’t so frustrated with Jamie’s loyalty to John Grey, but at least he got in this dig before he left. It was so well done it might have stung Jamie as much as it did John.

• The biggest moment of the episode in which blood was thicker than characterization: “When you said you have nothing of Jamie, you were wrong.” Is she talking about the fact that despite taking advantage of his power over Jamie to ask for sexual favors at the beginning of their acquaintance, he still has Jamie’s enduring friendship and loyalty? “You have William.” Oh. Sure.

• Early on, what set the sex scenes on “Outlander” apart from the more gratuitous ones on some other shows was that Jamie and Claire’s physical intimacy was a barometer for their relationship. This season, however, something feels off. Certainly the 1970s Harlequin bathtub dialogue doesn’t tell us much — unless Claire and Jamie are trying too hard to convince themselves they’re as happy as they say.

• Claire’s clothes tell her story here. It is especially effective to see her in the unbuttoned shirtwaist for her blunt conversation with John Grey, and the contrast it poses with the protectively wrapped shawl she wears as she bids John and William farewell.