Review: In ‘The Little Drummer Girl,’ Spycraft Is Seduction 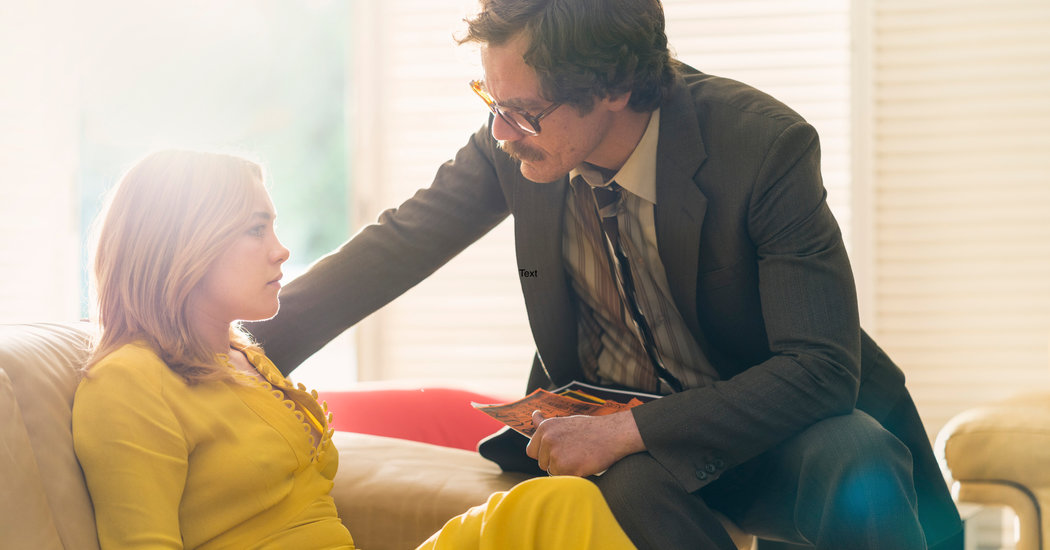 But “The Little Drummer Girl,” published in 1983, is not just any spy story, and you can see what may have drawn Park to adapt it for television, in a six-hour, three-night mini-series beginning Monday on AMC. While it’s as suspenseful as any Le Carré plot, it’s structured less around spy craft than around a series of seductions, overlapping and conflicting, that allow Park to indulge his fondness for moments of heightened melodrama.

More crucially, it’s a story about the intersection of espionage and theater — the ways in which spies are actors and actors are spies, both trained to investigate, deceive and live false lives. Le Carré makes this idea literal, with an Israeli counterterrorism team recruiting a young actress, through their own elaborate process of deception and staging, and persuading her to infiltrate a Palestinian network planning attacks in Europe.

That premise, with both sides participating in what the Israeli spymaster, Kurtz (Michael Shannon), calls “the theater of the real,” meshes with Park’s predispositions toward theatricality and artifice. The result is a superior entertainment, beautifully made and engrossing throughout (and an improvement in nearly every way on the 1984 film directed by George Roy Hill).

It won’t please every Le Carré fan, and it doesn’t do justice — doesn’t try to do justice, really — to one important aspect of his story, regarding the emotional fallout for the civilian once she’s gone all the way into the spies’ world. Somewhat perversely, given its subject, it’s not an acting showcase — it’s bound together by Park’s style and technique, and no performer stands out like Diane Keaton did in Hill’s film (she was the only thing worth watching). But on its own terms, this “Little Drummer Girl” is a success.

The fulcrum of the story is Charlie (Florence Pugh), a young British actress with leftist leanings, who comes on the radar of the Israeli team when she attends a lecture given by a disguised Palestinian. She’s exactly what Kurtz is looking for: talented, attractive and passionate, with a free-floating anger at the world that can, with the necessary work, be pointed in the direction he needs.

The work, once Charlie has been lured in, falls to Gadi (Alexander Skarsgard), another Israeli agent. Charlie will need to pose as the lover of a terrorist she hasn’t met, and Gadi prepares her by playing the part of the Palestinian, teaching her what she needs to know and priming her emotionally to play her role. It’s a performance and, like any good performance, a seduction, and the degree to which it’s real is a question whose consequences keep playing out after Charlie has moved into the terrorists’ world.

A large part of the work of “The Little Drummer Girl” is stage management — coherently and entertainingly navigating a complicated narrative that involves Charlie and her handlers; the Israeli, German and British intelligence services that help and hinder them; and the Palestinians, who gain prominence in the later episodes when Charlie becomes fully embedded, training at a camp in Lebanon and inching closer to the terrorist leader Kurtz and Gadi are pursuing.

Park does right by the suspense components. We always know where we are and (to the extent we’re supposed to) what’s happening, and in his first episodic TV project (working with the writers Michael Lesslie and Claire Wilson, and Mr. Le Carré’s sons Simon and Stephen Cornwell as executive producers), he shapes the material well over the six hours, avoiding dead spots.

But Park does it his own way, and the story and the themes, while meticulously rendered, are never entirely the focus. You also notice the slightly dreamy, dissociated atmosphere he conjures, even in familiar scenes of surveillance and investigation or military training, and his occasionally eccentric choices, like a chaotic capture filmed from a great distance, or a sudden shot in which Charlie’s eye stares out from inside the gasping mouth of a man she’s having sex with.

While he dives into the theme of theatricality, Park doesn’t seem as interested in the particularities of acting. Pugh is fine as a stubborn, opinionated young woman pulled into an unexpected adventure, but we’re not really given evidence of Charlie’s performing skills, and Le Carré’s notions about the toll on her — the likely consequences of bringing the passions of performance into the high-stakes, real-life world of terrorism — are mostly unexamined.

Park has fashioned an ending, presumably with Le Carré’s approval, that’s quite different in tone from the original, but moving and effective in its own right. Like everything else about “The Little Drummer Girl,” it’s entirely his.