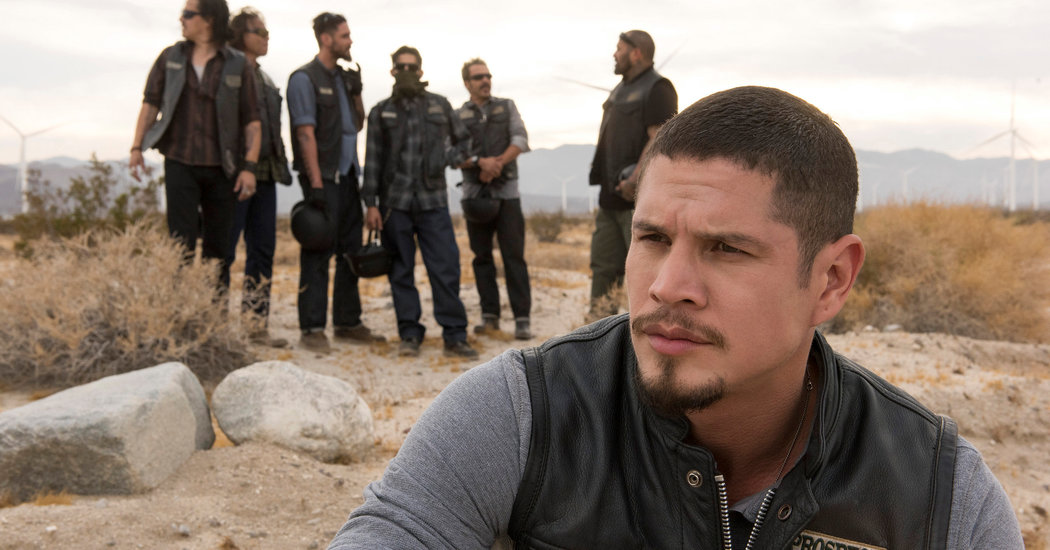 The show left a deep rut in the road of violent, testosterone-drenched antihero drama that many others have traveled since, and lately TV’s creative energy has been elsewhere. (Mr. Sutter’s follow-up, the medieval abattoir “The Bastard Executioner,” ran one season on FX before the creator pulled the plug.)

TV itself, it seems, is now a post-Jax Teller world. Has “Mayans” adapted to it?

Not judging from the first two episodes, the first of which airs Tuesday. But for a change in characters and scenery (Southern, rather than Northern California), it plays like “Son of Sons of Anarchy.”

Again at the center is an ambivalent gangster, this time Ezekiel “E.Z.” Reyes (J.D. Pardo), whom the Mayans take on as a “prospect” after his release from prison. (Yes, he’s E.Z., rider.) Once a bright student with a shining future, he’s turned to the gang as, he hopes, a temporary option.

But like Jax, he seems destined to get entangled in a battle of bad guys vs. worse guys. The pilot, 66 somber minutes not counting commercials, sets out a lot of game pieces: the Mayans, a rough-edged brotherhood; Miguel Galindo (Danny Pino), the icy Mexican cartel boss the Mayans have become ensnared with; Kevin Jimenez (Maurice Compte), a ruthless D.E.A. agent; and the wild card, an anti-cartel orphan army led by the vengeance-minded Adelita (Carla Baratta).

E.Z., unfortunately, is lost in this vast mural of exposition. He’s fleshed out less by Mr. Pardo’s quiet performance than by the characters around him, including Emily (Sarah Bolger), a pre-prison flame who’s started a new life without him, and his father, Felipe (Edward James Olmos). Mr. Olmos suggests gravitas and a weighty past simply by the way Felipe carries himself around his butcher shop.