The ‘Flight of the Conchords’ Special That Almost Wasn’t 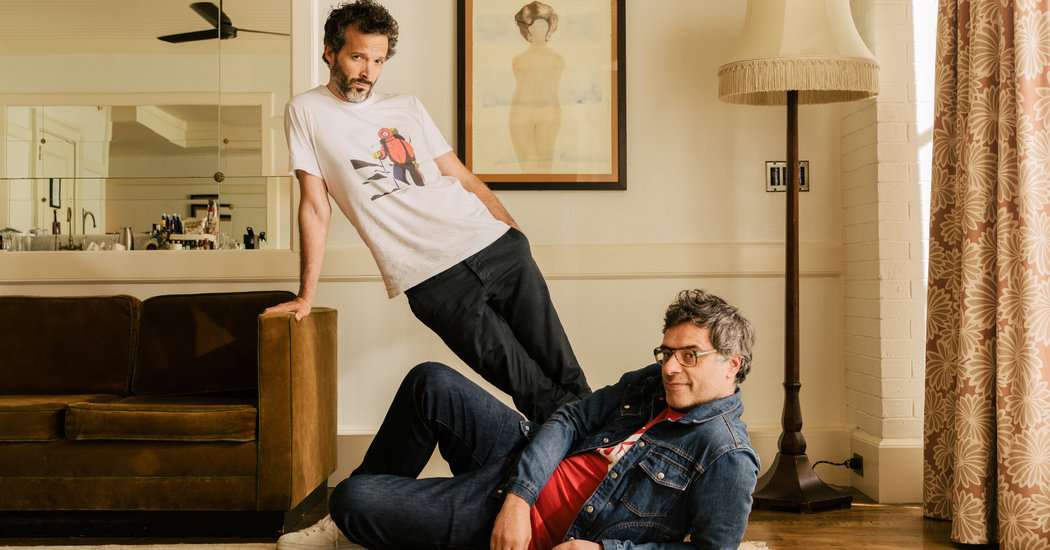 How hard could it be to get Flight of the Conchords together for a single show? After all, this comedic folk-rock band consists entirely of Jemaine Clement and Bret McKenzie, longtime friends from their college days at New Zealand’s Victoria University of Wellington, who hoped their satirical songs and deadpan banter would someday propel them far beyond the bar scene.

Today, corralling the two creative partners for gigs like their coming HBO concert special, “Flight of the Conchords: Live in London,” which makes its debut on Saturday, is no easy feat. In the nine years since their self-titled HBO sitcom came to an end, their individual careers have blossomed: Mr. McKenzie, 42, is an Academy Award-winning songwriter for “The Muppets” and Mr. Clement, 44, stars on TV shows like “Legion” and in films like “Moana.”

They’re family men too, with wives and children, and not always eager to undertake the grueling warm-up tours that precede a big concert taping (which will also be released as a Sub Pop album later this fall). Then in March, as they were getting to record the show at London’s Eventim Apollo Theater, Mr. McKenzie broke two bones in his left hand. (He’s fine now, and the special was recorded in July.)

At last, Mr. Clement and Mr. McKenzie arrived in New York in late September to talk about the long road that led to “Live in London” and their unexpectedly complicated creative process. These are edited excerpts from that conversation.

This concert special had been in the works for some time, and then it had to be delayed when Bret injured himself this past spring. What happened?

BRET McKENZIE The day before we were going to film the HBO special, I fell down the stairs in an old house in London and landed weirdly on the edge of a wooden step. I had multiple fractures in my hand and couldn’t play guitar. It was quite frightening to have something like that potentially change your career.

Once it was clear that Bret would recover, was it scary to have to put everything on pause for a few weeks?

JEMAINE CLEMENT For all the management people. For us, it was all right. It was better in a way. It was a bit more time to get ready for the special.

McKENZIE Mind you, we didn’t actually practice that much more in between. But it did make us feel like we had. We got a couple of extra weeks.

Did the injury hamper your ability to play your songs?

CLEMENT You mean, do the muscles get brain damage?

McKENZIE If you’ve broken your hand, they ask you to imagine you’re playing guitar and it helps you. The muscle memory helps repair the damage. It was great, actually. Now my hand works better.

CLEMENT Now you have more proper technique. It’s like “The Six Million Dollar Man.” Graft a new hand on.

McKENZIE I did ask the doctor, “Could you get me an Eric Clapton hand?”

What else did you do to prepare for this show?

McKENZIE There’s a lot of time where we’re watching YouTube clips to remember our own songs. The songs that we used to play, like, 15 years ago are just there. And we can play them straightaway. The songs we’ve played in the last five years, they don’t even exist in our memories. We have to relearn them.

CLEMENT Sometimes people request songs we did for the TV show, but we only played them in the studio. We’ve never figured out how to do it live with two guitars.

Why did you decide, after all this time, to make a live special and album?

McKENZIE I like the idea of capturing what we do live, because it doesn’t really exist on tape. We’ve spent so many years touring, but we’re more well known for the TV show, which is actually quite different from what we really do. People come to the shows, not really knowing what they’re going to see, and they’re surprised that we can play guitar and sing the songs.

CLEMENT Someone asked me, “Why do TV shows always tour?” I was like: “We’re a band. We were a band first, and then we did a TV show for a little while.”

McKENZIE It’s completely different. I’d recommend it for any band trying to get exposure. Have a TV show. Certainly, making an album now is more of a charity job.

With all the other projects you now work on individually, is it harder to find time to get together as a band? Does it ever feel like an obligation?

CLEMENT Theoretically we could do it whenever we wanted, because we both live in the same city in New Zealand. But I find we’re not there at the same time. We’ve also got families — if we weren’t reading our kids stories at night and had nothing to do, we’d go to a bar and play songs.

McKENZIE There’s often a bit of baggage that comes with our hanging out, of work and things that need to be done. There’s a list of things we’re supposed to have done — oh God, we’re supposed to approve those photos or whatever. It does cloud the friendship.

CLEMENT Then when we’re doing the show, we don’t have any days off. There’s no choice but to hang out.

Has your songwriting process changed over time?

CLEMENT No. It’s the same as when we were playing little bars. We work and work on it, like we did back then.

McKENZIE Playing live is such a quick editor. You just feel it — if the crowd goes quiet, if the song’s not working or it’s not connecting. Some of the songs we were playing, we’re still figuring them out. In the editing room, we’d go, “Oh, right. That was too long. That’s not cool.” We’d never notice that onstage.

It was interesting, in the special, to see how much more breathing room you could give your songs —

McKENZIE You mean they’re quite long. [laughs] They’re long, oh, the songs are so long!

Many of the newer numbers are duets. What’s the origin of the song between the father and his son?

CLEMENT We call that “Father and Son.”

McKENZIE It’s a problem. There’s another song [with that name]. It’s going to need a name pretty soon.

CLEMENT I started writing it. I had been arguing with my wife and then I was imagining what it would be like, being divorced. [Sees anguished expression forming on reporter’s face.] No, we’re O.K.

McKENZIE Characters in broken relationships seem to show up a lot in our work. But we’re both in good, long-term relationships.

CLEMENT I’d take what I wrote to Bret, play what I had, and he’d fill in the son parts.

McKENZIE At one point I had a question about why is the sky blue?

CLEMENT And I answered by describing the atoms in the air refracting different colors. I was really happy with it, but it wasn’t that funny.

Do your audiences seem to mind if the newer songs are still being figured out in performances?

McKENZIE No, they’re so forgiving.

McKENZIE We’re the only ones who are hard on ourselves. No one else cares. Everyone else likes watching us mess up. In fact, they prefer that, I think.

Do you find that your fans know more about New Zealand now than when you started?

CLEMENT A lot of Americans are moving there.

McKENZIE Particularly when Trump got voted in, I got so many emails from people saying, “How do I move to New Zealand?” A lot of wealthy San Francisco internet moguls are buying bolt-holes. There’s a run of random tech billionaires who have gotten what used to be sheep farms, down in Queenstown. Their plan is that when the world falls apart, they’re going to fly down there to hide and drink nice wine.

Is that a viable strategy for surviving an apocalypse?

CLEMENT Depends how high the water rises, I suppose, since we’re islands.

You’ve said you felt your fame peaked with the HBO series. What echelon do you think you occupy now?

McKENZIE We’re kind of famous, but not too famous. Yesterday we were walking through New York and we had our guitars. That’s not a good idea. By yourself, without a guitar, no one bothers you. It’s great.

CLEMENT But as Bret said yesterday: Two of us together removes some doubt. Two of us with guitars removes all doubt.

You don’t seem to mind if you go unrecognized in public.

McKENZIE Having had a taste of what it’s like being famous, when the TV show came out, it’s crazy. You can’t go out properly.

CLEMENT A lot of New Zealanders, when the show came on, would come up to us like we were representing their immigrant experience. They would just instantly start talking to us like we knew them. I remember a guy coming up to us and going, “I wondered when I’d see you clowns.”

Is this the last project you might do as a band for several months? Years?

McKENZIE Definitely for a while.

McKENZIE We’ll get back together in a couple of years, just to talk about our last interview.

Flight of the Conchords: Live in London
Saturday on HBO