‘The Girl in the Spider’s Web’ Review: Lisbeth Salander, Blunted in Tooth and Claw 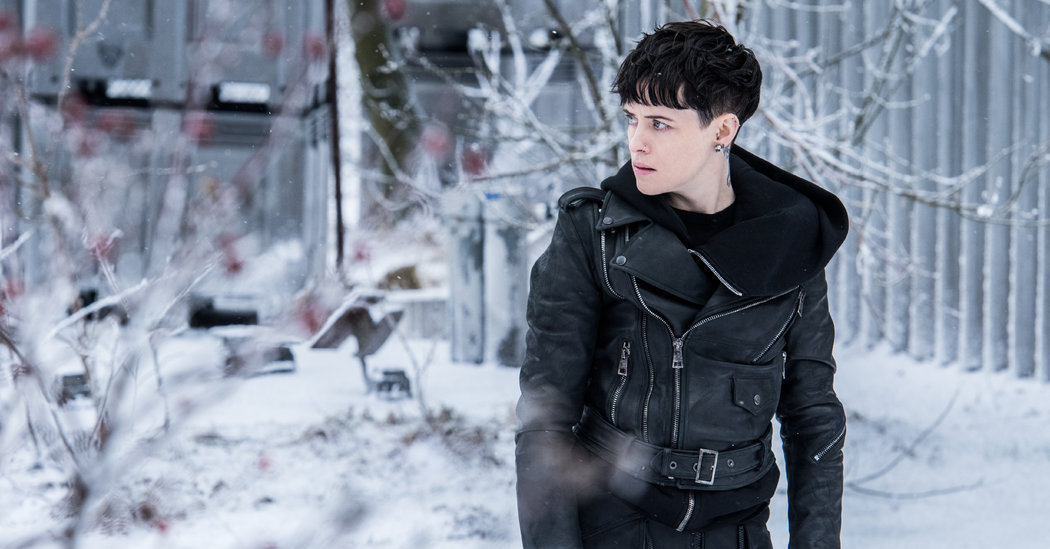 Even the tattoo is worse.

One of the signatures of Lisbeth Salander, the hacker-heroine of the Millennium series, is her tattoo of a dragon, which has morphed as the screen franchise has, too. In the original Swedish movie of “The Girl With the Dragon Tattoo,” an inky monster covers a huge swath of Salander’s pale back, its teeth and long claws angling for a fight. In David Fincher’s Hollywood take, a kinetic, ferocious-looking dragon drapes over Salander’s left shoulder, its leathery wings dynamically folded and long tail winding down the side of her back.

In the latest and emptiest Salander screen vehicle, “The Girl in the Spider’s Web,” the dragon perches on Salander’s back, its wings fanned and mouth open, like a hungry baby bird. The dragon looks as if it paused in midflight to catch a worm or pose for a coat of arms. It’s as blankly ornamental as the rest of the movie, which stars Claire Foy as a preposterously jacked-up version of the renegade hacker. Salander is still typing furiously and retains a taste for black clothes and vengeance, but her running and gunning now suggest a Goth cosplaying James Bond.

It’s an insulting development for such an original character, who no matter how poorly translated on the page or on to the screen has managed to stir the imagination. As her best moments underscore, Salander isn’t memorable simply because of her hacking or her ability to take down a male assailant twice her size, but because she exists outside of familiar binary classification. An amalgam of gender stereotypes distilled into one rough yet slippery package, she isn’t fragile or ferocious, victim or predator, feminine or masculine. She’s both, which means she’s neither, one reason it has been hard for mainstream cinema (with its his or her boxes) to turn her into coherent cinematic brand.

Here, that unclassifiable quality has been blunted and contained, and Salander made into another blandly tough chick. It’s a bad fit for the character and for Foy, though the fault is scarcely the actress’s. Foy is best known for the Netflix series “The Crown,” in which she plays the young Queen Elizabeth II, a role that allowed her to express her range with intricate subtlety. She’s cut loose since, going flamboyantly big as a psychiatric patient in Steven Soderbergh’s “Unsane.” For “Spider’s Web,” Foy has been tamped down again. This time, though, little nuance seeps through the mask she wears (or her vaguely accented English), for which the filmmakers deserve the blame.

Just don’t take it out on Stieg Larsson, who originated the Millennium trilogy and died in 2004, the year before the first novel was published. The movie is based on the first of two follow-ups by David Lagercrantz, also titled (in English) “The Girl in the Spider’s Web,” suggesting that this character is too lucrative to ever properly mature to womanhood. A few itsy-bitsy spiders pop up, and Salander spins a web for a very bad man in his own hidey hole, stringing him upside down in the name of, well, something (just don’t call it feminism). From then on, she takes turns playing pursuer or pursued in a tangled tale that brings together old loves, family horrors, state secrets and life on Earth.

A wash of murky hues and murkier narrative developments, the movie was directed by Fede Alvarez, who shares script credit with Jay Basu and Steven Knight. Alvarez tries to pep things up with chases, near escapes, dramatic rescues, fetish wear and female nudity. But the whole thing is a bummer, at times risible, as when swarms of law-and-order types conveniently overlook a laughably visible surveillance camera. Joining Foy in her travails are Sverrir Gudnason as Mikael Blomkvist, Salander’s ally and former lover. Lakeith Stanfield, Stephen Merchant and a badly used Vicky Krieps also drop by for abuse, though their exploitation pales compared with that endured by Salander enthusiasts.