Welcome to Halloween Month! The votes are counted and this month we have three spooky books for you this month.

The second book we will be reading with the group is Anno Dracula by Kim Newman.   Your host for this discussion is SG. 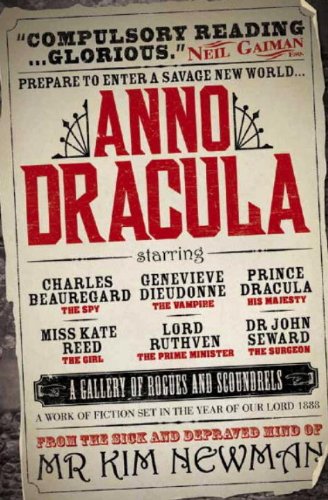 Product Description
“Kim Newman’s Anno Dracula is back in print, and we must celebrate. It was the first mash-up of literature, history and vampires, and now, in a world in which vampires are everywhere, it’s still the best, and its bite is just as sharp. Compulsory reading, commentary, and mindgame: glorious.” – Neil Gaiman

“Politics, horror, and romance are woven together in this brilliantly imagined and realized novel. Newman’s prose is a delight, his attention to detail is spellbinding.” – Time Out

“Stephen King assumes we hate vampires; Anne Rice makes it safe to love them, because they hate themselves. Kim Newman suspects that most of us live with them… Anno Dracula is the definitive account of that post-modern species, the self-obsessed undead.” – New York Times

“Anno Dracula will leave you breathless… one of the most creative novels of the year.” – Seattle Times

‘A ripping yarn, an adventure romp of the best blood, and a satisfying… read’ – Washington Post Book World

“The most comprehensive, brilliant, dazzlingly audacious vampire novel to date. ‘Ultimate’ seems an apt description… Anno Dracula is at once playful, horrific, intelligent, and revelatory.” – Locus

“A marvelous marriage of political satire, melodramatic intrigue, gothic horror, and alternative history. Not to be missed.” – The Independent

“Once you start reading this Victorian-era thriller, you will not be satiated until you reach the end.” – Ain’t It Cool

“Kim Newman brings Dracula back home in the granddaddy of all vampire adventures. Anno Dracula couldn’t be more fun if Bram Stoker had scripted it for Hammer. It’s a beautifully constructed Gothic epic that knocks almost every other vampire novel out for the count.” – Christopher Fowler
“The most interesting take on the Dracula story… to date. Recommending this one to all those that love Dracula and historical fiction!” – RexRobotReviews
—

It is 1888 and Queen Victoria has remarried, taking as her new consort Vlad Tepes, the Wallachian Prince infamously known as Count Dracula. Peppered with familiar characters from Victorian history and fiction, the novel follows vampire Geneviève Dieudonné and Charles Beauregard of the Diogenes Club as they strive to solve the mystery of the Ripper murders.

This brand-new edition of the bestselling novel contains unique bonus material, including a new afterword from Kim Newman, annotations, articles and alternate endings to the original novel.

About the Author
Kim Newman is a well known author: he has won the Bram Stoker, International Horror Guild, British Fantasy and British Science Fiction Awards and been nominated for the Hugo and World Fantasy Awards. He is also a renowned movie critic. His reviews appear often in Empire Magazine and he has written for The Guardian, Time Out and many others. He makes frequent appearances on radio and TV.

Please join us if you can!  Discussion takes place in the Book Group section of the forum.