Welcome to Banned Books Month! The votes are counted and this month we are attempting to do all three of the books that got the most votes. It should be doable as the books are not large volumes.

The third book we will be reading with the group is Fahrenheit 451 by Ray Bradbury.   Your host for this discussion is Janien. 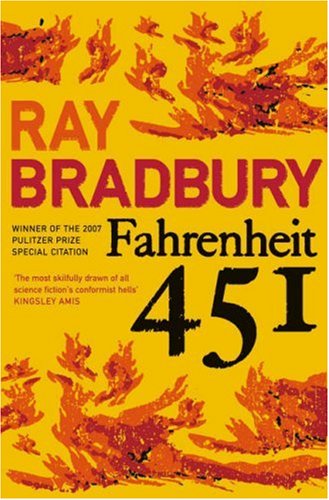 Product Description
The hauntingly prophetic classic novel set in a not-too-distant future where books are burned by a special task force of firemen. Guy Montag is a fireman. His job is to burn books, which are forbidden, being the source of all discord and unhappiness. Even so, Montag is unhappy; there is discord in his marriage. Are books hidden in his house? The Mechanical Hound of the Fire Department, armed with a lethal hypodermic, escorted by helicopters, is ready to track down those dissidents who defy society to preserve and read books. The classic novel of a post-literate future, ‘Fahrenheit 451’ stands alongside Orwell’s ‘1984’ and Huxley’s ‘Brave New World’ as a prophetic account of Western civilization’s enslavement by the media, drugs and conformity. Bradbury’s powerful and poetic prose combines with uncanny insight into the potential of technology to create a novel which over fifty years from first publication, still has the power to dazzle and shock.

About the Author
Ray Bradbury has published some 500 short stories, novels, plays and poems since his first story appeared in Weird Tales when he was twenty years old. Among his many famous works are ‘Fahrenheit 451’, ‘The Illustrated Man’ and ‘The Martian Chronicles’.

There is a 1966 adaptation of the book starring Oskar Werner and Julie Christie that is worth checking out – especially for the Sixties idea of the future!  It was directed by François Truffaut.

The group discussion will start on September 1st and run all month. Please join us if you can!  Discussion takes place in the Book Group section of the forum.