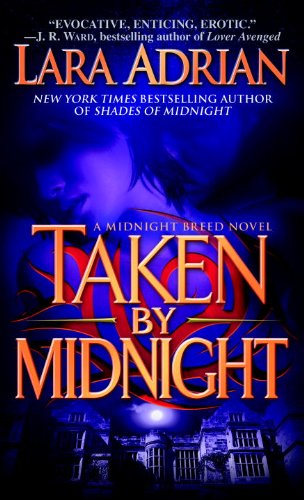 I have several books on the go at the moment and in a multitude of formats.  I just finished Lara Adrian’s Taken by Midnight (ebook) which came out a week ago and I had to drop everything to read because I am slightly obsessed with this series, which I lovingly call The Fake Dagger Brotherhood 🙂  Quite honestly in my head, the Black Dagger Brotherhood and the Order all live together in a big underground compound in my head.  They are very similar series and the characters are completely intertwined now for me.

I finished two audio books, one was a reread of The Owl Killers by Karen Maitland (which we read with the book group in April this year) and I really loved it, and since it has just been released on audio, I had to listen to it.  It’s the same narrator for Company of Liars, another brilliant book by this author, and the narrator is just perfect. He does great accents and female character voices – so much so that you forget you are even listening to a man!  I don’t normally read the same book twice in such a short period of time but for this one I made an exception.  Her next book The Gallows Curse is out in the new year and I expect we will be reading that one with the group.   The second audio book I listened to was Paranormalcy by Kiersten White.  This one gets great reviews on amazon but I’m afraid it just didn’t do it for me.  It’s young adult – a genre I read a lot of – but somehow it seems too juvenile, but that’s not it either since Percy Jackson is quite juvenile and I loved those, so I can’ t quite put my finger on what is wrong with this book.  It didn’t help that the narrator sounded like Buffy on crack.

I am also reading Blow by Blow – a biography of Isabella Blow (hardcover)written by her husband Detmar Blow as it’s a new release here and due to be released in the US in N0vember.  I always saw her as a bit of a kook and I guess she was really but she was also very influential in the fashion world and a very talented woman.  What I didn’t know until her death was how much she struggled with depression and life in general.  She discovered Alexander McQueen and bought his entire first collection and perhaps without her we would never have known this talented designer.  Alexander McQueen also took his own life in February this year.  So I’m reading this biography but it’s going slowly due to the subject matter and subsequent emotional reactions.

I started reading – well listening to – The Hunger Games by Suzanne Collins, mainly to see what all the fuss was about, and I’ve stalled halfway through it, because I don’t really find it that interesting/gripping/exciting/original/whatever/  butr I figure since I am halfway through then I really should get back to it at some point, but other more interesting books are taking up my time right now.

Another book that is also on the back burner is the latest in the Women of the Otherworld series, Waking the Witch by Kelley Armstrong.  After listening to the same CD twice without realising it, it occurred to me that I was wasting my time and I really didn’t care that much what Savannah was doing – and one thing that I really don’t care for with these first person female character books is that we need to have explained to us, every thought process that the character has!  I don’t need that much explained to me.  This is something that applies to a lot of these books and it bores me.  I feel like I should finish the book since I am halfway done and KA has been a favourite author for years now, but at the moment there are other things I want to read more than this one.

I’m also reading Kate Atkinson’s latest Jackson Brodie – Started Early, Took My Dog and so far so good, except that it was an ARC and there are a few typos and every time I spot one it breaks my reading flow.  It’s very funny and Jackson is back on his home turf.  I really hope something good happens to him in this book.  My sister and BIL both read my copy on holiday and loved it so it’s all good.

But the books that have caught my attention quite accidentally are the Rizzoli & Isles books by Tess Gerritsen.  One of them was recommended to me a couple of weeks ago, as a scary read for Halloween.  It was book six in the series – The Mephisto Club – and normally I don’t like to read out of order but I figured why not.  It was actually very good I thought, and then I read somewhere that this was not the best in the series, so I was intrigued and hunted down book one – The Surgeon.  OK if scary serial killer crime fiction is your thing then this book is for you.  I have to just mention that in between reading book six and book one I also found the first season of the Rizzoli & Isles TV show which is based on the events of book one and two, and watched all ten episodes thus spoiling myself for book one and two in the process!  But even with that and knowing the name of the killer thanks to the TV show, I was still totally absorbed in both books (yes I read The Apprentice too) and I kept coming up with possible suspects and then having to remind myself that I already knew the name of the killer and therefore it couldn’t be whoever it was I was suspecting at the time.  I think that’s the sign of a good crime novel, even if you know the name of the killer going in, the author still manages to direct your attention elsewhere!

I am now on to book three in the series, The Sinner.  I can’t seem to help myself, although this one seems to be more of an Isles book than a Rizzoli book so far and I’m not really enjoying it as much as the others so far.

Book Group books that also need to be started soon are Bayou Moon by Ilona Andrews for the Paranormal Social Club, and Anna Karenina by Leo Tolstoy and whatever book we end up doing for Halloween.  I am also working through an Environmental Science book for a course I’m doing but that is slow going for obvious reasons.

Kill the Dead, the sequel to Sandman Slim by Richard Kadrey came out last week and the Dresden Files short story anthology Side Jobs by Jim Butcher is out at the end of the month, so I will be reading both of those very soon – even though there is only one new story in Side Jobs, it takes place after the cliffhanger ending of Changes, so that’s a must have.

Vine night is next week, so I’ll get to choose two more products to review, probably books but you never know.