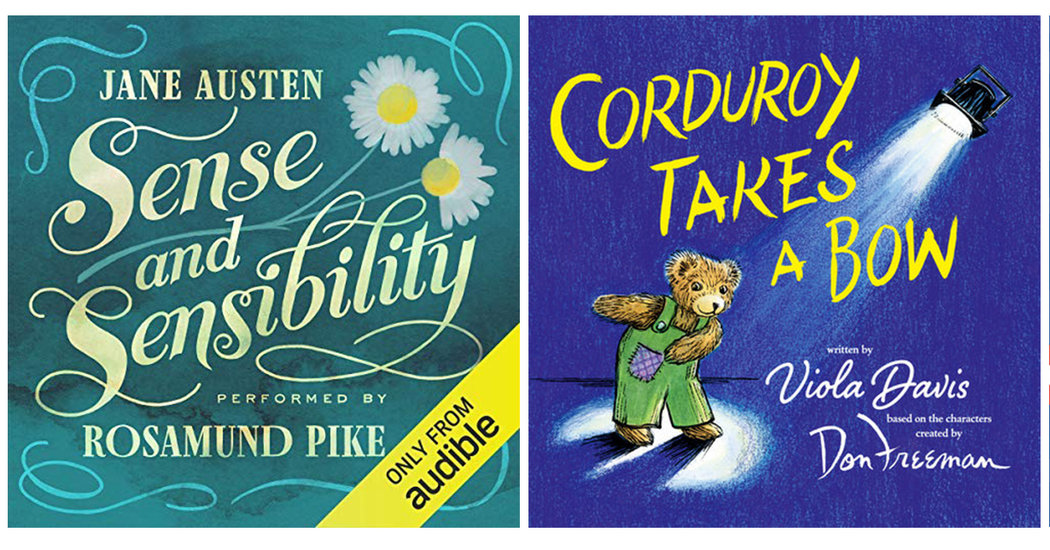 Jane Austen — that most enduringly popular of early-19th-century writers, chronicler of domesticity and love — gets the star treatment yet again in new recordings of two of her most famous novels: SENSE AND SENSIBILITY, read by Rosamund Pike, and EMMA, read by Emma Thompson and a cast including Joanne Froggat and Morgana Robinson. (Audible Studios.) SADIE By Courtney Summers. Read by a full cast including Rebecca Soler, Fred Berman, Dan Bittner and Gabra Zackman. (Macmillan Audio.) A girl searching for her sister’s killer employs the help of a radio personality who turns her quest for justice into a podcast. The premise of this young adult thriller makes it a perfect audiobook, as much of the story is recounted as a radio whodunit. CORDUROY TAKES A BOW By Viola Davis. Read by the author. (Listening Library.) As the lovable teddy bear Corduroy turns 50, the award-winning actress takes over as author of this classic children’s book series, delivering a fitting story about Corduroy’s first visit to the theater. For young listeners new to audiobooks, Davis’s reading makes for an excellent gateway to future listening. THE BELOVED WORLD OF SONIA SOTOMAYOR By Sonia Sotomayor. Read by Jaina Lee Ortiz, with an introduction read by the author. (Listening Library.) The Supreme Court justice tells the story of her life in this middle-grade version of her best-selling adult memoir, “My Beloved World.” From growing up in the rough housing projects of the South Bronx to dealing with juvenile diabetes and her parents’ financial troubles, this is a story about overcoming adversity and achieving the seemingly impossible.

In which we ask colleagues at The Times what they’re reading now.

“I’m rereading Tolstoy’s THE GOSPEL IN BRIEF. It’s his translation of the four Gospels of the New Testament, which he condenses into a single narrative of the life of Jesus. It’s idiosyncratic to the point of sacrilege. All the supernatural stuff is left on the cutting room floor — the Immaculate Conception, the walking on water, the Resurrection. What remains is the story of a poor person who showed up out of nowhere and started saying astonishing things about life and how to live it. Tolstoy doesn’t care whether Jesus was God or whether Christianity is a divine revelation. He doesn’t care what St. Paul thought about Jesus. What he cares about is trying to rescue from the murk of dogma a practical teaching that gives meaning to life. Perhaps he succeeded! Wittgenstein carried this book in the trenches in World War I and credited it with saving him from despair.”